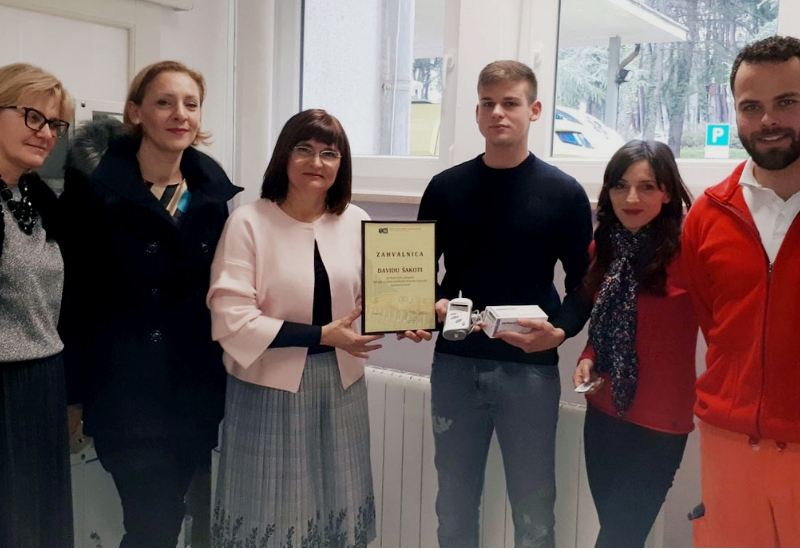 The money which David Sakota donated was used to buy a pulse oximeter for children and adults, which is used for measuring the level of oxygen in the body. The money also helped purchase surgical glue, an alternative for stitches with wounds.

One of the key elements of a quality healthcare is an efficient emergency service. As it is impossible to know who and when might require this service, its good functioning is a direct concern of the entire society.

This was exactly what David Sakota thought. He is a young entrepreneur and owner of the restaurant Pentagon Tower (Peterkutna kula) in Porec, which is famous for preparing delicious meals inspired by the rich culinary tradition of Istria. This young man, who has taken over the running of the family business, was impressed by the work of local emergency services and wished to help improve it even more.

“We believe that the emergency health service is one of the most important ones in Porec, to the citizens as well as the numerous tourists. Despite of all the hard work of paramedics, we have learned that there is still a need for equipment and financial support, and we decided to help. I also hereby invite all entrepreneurs from the region to make their contribution towards the improvement of our community. The idea came to us when we saw the hard work of the paramedics and it occurred to us that we ought to find a way to help and make their jobs easier”, said Sakota.

The generous donation of about EUR 2,000 (KN 15,000) allowed the purchase of a device used for measuring the level of oxygen in the body, but also a revolutionary improvement in modern surgery- skin glue, which is used as an alternative with open wounds. Of course, as this type of medical intervention is quite common with emergency services, this will come as a great relief for medical staff and patients alike.

“The donation was used in the best way possible, of the purchase of a pulse oximeter for children and adults, which is used for evaluation the level of oxygen. The second part of the donation was used for the purchase of skin glue, which is a fairly new concept here, although it has been used for around 10 years in the world, with fewer people having stiches. In 30 seconds we can stick would together and move on with further interventions. It doesn’t hurt at all and leaves no scars, and the quality of the procedure is much better and quicker. This glue is not, however found on the list of Croatian Institute of Health and has to be bought, which is what we did in order to make our patients better”, said head of Porec emergency medical service Gordana Antic.

The emergency team presented David with a thank you plaque for this gesture, hoping he might serve as an example to entrepreneurs from Porec and the surrounding area.