The Future of Giving: 3 Key Takeaways from the National Philanthropy Conference | Giving Balkans

The Future of Giving: 3 Key Takeaways from the National Philanthropy Conference 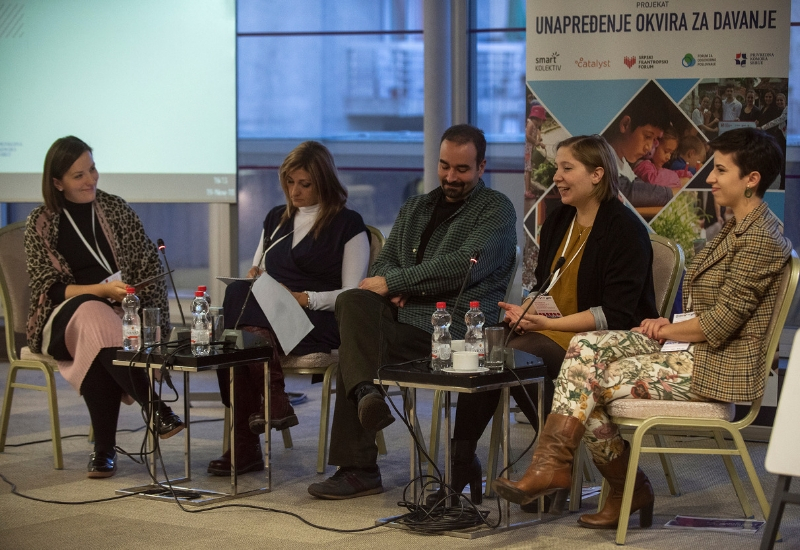 The Future of Giving: 3 Key Takeaways from the National Philanthropy Conference

“The times they are a changin'” when it comes to philanthropy in Serbia. The sum of money donated is getting bigger, ways of giving are becoming more innovative, and the number of actors is increasing.

This is why at the beginning of the year we formed the Coalition for Giving (Koalicija za dobročinstvo) with a few other foundations, and with the support of USAID, in order to use the next four years to improve the framework for giving. The Coalition also managed to start the Philanthropy Council (Savet za filantropiju), so that we may improve the existing legal framework.

Our Coalition partner, Trag Foundation organized the first “National Philanthropy Conference: The Future of Giving”, which took place on 19th and 20th November in Hotel Zira. The aim of the conference was to give an overview of philanthropy in Serbia in order to provide insight into the future.

Some 120 people took part in the conference, and this included representatives of the nonprofit and corporate sectors, media as well as state representatives. Several panels included inputs from directors and program coordinators of some of the biggest nonprofits, CSR and social banking experts, lawyers and nonprofit campaign experts.

These are the key takeaways from the conference:

The giving infrastructure is developing

Wait a second – “the giving infrastructure”?

Compared to the circumstances of 5 years ago, when Catalyst Balkans started tracking philanthropy in the region, some things have changed significantly – especially as there are now new ways to donate. In Serbia there currently exist:

Donacije.rs – in March of this year, Catalyst Balkans relaunched this crowdfunding platform for nonprofits, which organizations use to receive donations for their programs. Over the course of 8 months, 17 campaigns launched raised over EUR 33,800 (RSD 4,000,000). Almost all organizations which ran successful campaigns, said that apart from the funds raised the most valuable experience has been the constant contact with their community.

Community cards  –Ana and Vlade Divac Foundation has announced in November this year that it is  launching a community card program in 5 local communities. This is a type of loyalty card, which citizens can use shopping in different stores, and which gives them all sorts of discounts.

However, discounts aren’t the only thing community cards grant. Each time the card owner buys something in stores which agree to take part in the program, apart from the discounts for the buyer, one part of the sum paid is also being directed to the Community Fund. So, the owners of community cards will be able to donate money for projects run in their own communities, without any additional cost. Moreover, they will themselves be able to vote and decide which projects will be supported in this manner.

Investments – a few nonprofits have begun putting money into investments in order to achieve greater sustainability (Despite the headlines seen in some of the media about the case of Support Life Foundation ( Fondacija Podrži život) this practice is completely legal, accepted on a global level, even recognized as an example of good practice). This is how Trag Foundation created its endowment fund.

However, the public perception of philanthropy is completely distorted

Over the last 5 years, Catalyst Balkans has been tracking and researching what is going on with philanthropy in Serbia. We know the real state of things, which you may also find in our annual reports or our Giving Balkans app.

And yet, what is the image presented to ordinary citizens? Trag Foundation asked them, and the results of this survey are somewhat surprising.

Of course, most people consider the poor economic situation to be the main obstacle for the development of philanthropy, however over 50% of them doesn’t trust ways in which this money is spent, and 25% finds the programs to be bad and that the money is wasted. Around 23% thinks the lack of information is another problem.

What can we do to change this?

Firstly, nonprofits have to take part in working with the community and communicate on a regular basis with their supports. When we say transparency is key, this doesn’t mean it’s enough to just publish the annual financial report on your website (who’s got time to read that kind of stuff anyway, unless it’s their job to do it?).

On the other hand, the media must report on philanthropy topics with greater responsibility. This is usually an area full of inspirational and moving stories – however media reporting usually ends there. They fail to inform the public of specific ways in which they can help out, or report on the results once a particular charity initiative ends. All these stories of good deeds could have a much greater impact if they were told to the end.

However, this time the nonprofit sector is not alone

Why do we believe, that despite a distorted public image, it is possible to change for the better?

With developing the infrastructure, for years the nonprofit sector has also been proposing legal solutions which would improve philanthropy in Serbia. So far there was little appetite for such proposals.

However, these proposals are now also backed by the business community, and the state has opened its door by creating the Council. Of course, the mere existence of the Council is not enough, and we will have to see what results it achieves in the following few months.

But, since this synergy has been created with several commercial associations, we believe change is possible.

Even if the infrastructure and possibilities are growing, unless we change the way we communicate and work with citizens, all this progress can become invisible, even cancelled.

Unless organizations step out of their bubbles, all the good that they are doing can remain on the sidelines.

The nonprofit sector has to invest more effort into building bridges towards the media, commercial sector and the state. In return, all of them have to show will and responsibility towards the community. The first steps have already been made in the right direction and we hope 2019 will bring results.

What will your organization do in 2019 to improve its engagement with the community?