In the crisis year of 2020. citizens and companies in Serbia donate over 2.7 times more than in 2019 | Giving Balkans

In the crisis year of 2020. citizens and companies in Serbia donate over 2.7 times more than in 2019 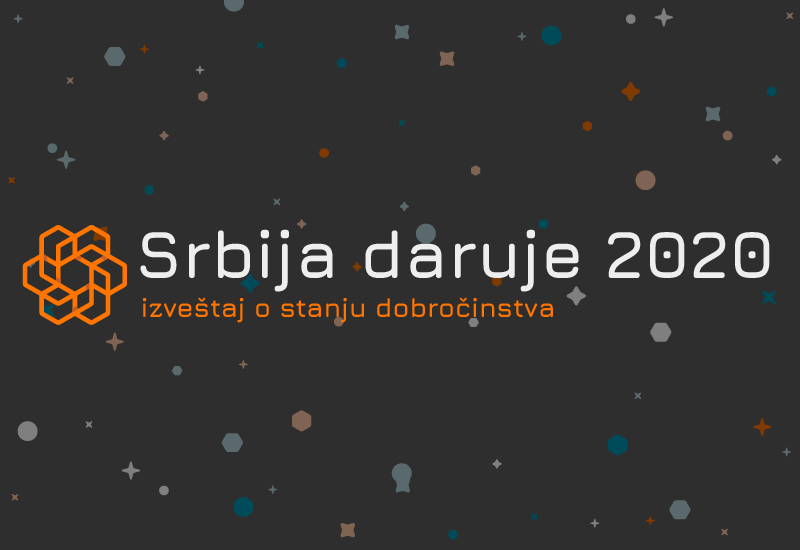 In the crisis year of 2020. citizens and companies in Serbia donate over 2.7 times more than in 2019

According to the estimates of Catalyst Balkans, the citizens and companies donated more than 90 million EUR for the common good in 2020 and 42.1% of the amount was directed at mitigating the effects of the coronavirus. The COVID-19 pandemic marked the year and influenced philanthropy in Serbia in many ways. Primarily, the donated amount exceeds the last year's givings 2.7 times. It's particularly important to stress that even givings unrelated to the COVID-19 pandemic, which we feared would be sidelined, turned out greater than 2019's by more than 10 million EUR.

Who were the biggest donors in Serbia in 2020?

The pandemic had reshaped the makeup of donors throughout the year. After several consecutive years where citizens' mass giving was greater than the donations of the corporate sector, the businesses have now contributed to more than half of the total recorded donations. The citizens, who have traditionally been the most prolific and active donors take second place this year, while also providing support to the causes unrelated to the pandemic.

Regardless of the changed circumstances, key donors remain to be citizens through mass giving, the corporate sector and individuals. These three groups are responsible for 86.3% of all philanthropic instances, donating 90.4% of all recorded funds.

While companies have been most actively donating to the government for the fight against COVID-19, the citizens were most commonly donating for medical treatments of people with health issues through the nonprofit sector.

What were the most common donation themes in 2020?

Excluding mitigating the effects of the coronavirus in 2020, the most supported themes remain the same as in 2019 and in the same order. Healthcare, support to marginalized groups, poverty relief and education have been dominant, although on a lesser scale due to the pandemic.

The most noted decline in value of donations was noted with social entrepreneurship, givings for sports and support to independent media. On the other hand, after several years, donations to human rights protectors reappear.

Who were the donation recipients in Serbia in 2020?

Regarding the number of philanthropic instances, the greatest share among the recipients always goes to individuals and families. In 2020, despite the pandemic, they received the greatest number of donations as well. However, when it comes to donated amounts, they received only 4.4% compared to 11.4% in 2019.

The pandemic had indeed changed the composition of donation recipients. Compared to last year, more instances were aimed at the government than the nonprofit sector, as a result of the extraordinary circumstances caused by COVID-19.

Major changes were noted in the distribution of donations to the state and the nonprofit sector. While the donors' level of trust towards the government had been declining in the years before, in 2020 almost 43.4% of the recorded sum was donated to the institutions as well as local and national government (for comparison, it was 15.2% in 2019).

Read the full report at the link.

The research Giving Serbia 2020 – Annual Report on the State of Philanthropy is part of the project ‘Framework for Giving in Serbia’ financed by USAID and implemented by the Coalition for Giving led by Ana and Vlade Divac Foundation. Other members of the Coalition are Trag Foundation, Catalyst Balkans, Smart Kolektiv, Serbian Philanthropy Forum, Responsible Business Forum and the Serbian Chamber of Commerce and Industry. The research was carried out by Catalyst Balkans in partnership with Trag Foundation and with additional support of the Charles Stewart Mott Foundation and the Rockefeller Brothers Fund.

The content of the report is the sole responsibility of Catalyst Balkans, Trag Foundation and Ana and Vlade Divac Foundation, and it does not necessarily reflect the views of the USAID, the United States Government, the Charles Stewart Mott Foundation and the Rockefeller Brothers Fund.