CESI: What do everyday activism and the fight for equality look like, which has been going on for 25 years? | Giving Balkans

CESI: What do everyday activism and the fight for equality look like, which has been going on for 25 years? 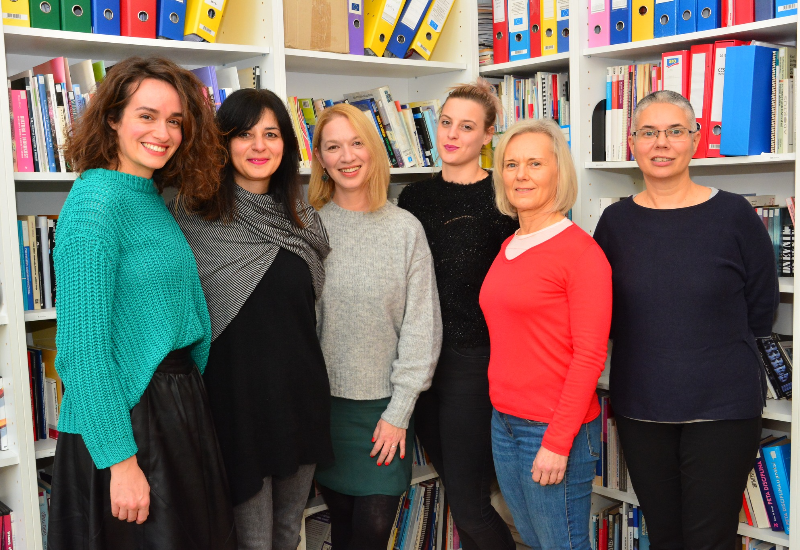 CESI: What do everyday activism and the fight for equality look like, which has been going on for 25 years?

CESI - Center for Education, Counseling, and Research is a women's feminist organization founded on March 8. For 25 years, CESI has been advocating for the improvement of the social position of women and the achievement of gender equality. Anamarija Tkalčec, the coordinator of CESI and leader of the Social Justice and Equal Opportunities program, told us what that struggle looks like and what important activities, with the support of numerous volunteers, this association carries out every day.

Anamarija: CESI was founded on International Women's Day - March 8, 1997 - as a response to the problems of violations of human rights, especially women's and minority rights, problems of militarism, nationalism, and the decline of economic standards in the post-war period, and was founded by activists and members of women's and peace initiative with many years of experience in working with women who survived the trauma of war. The team has seven members, and many associates and volunteers contribute to the development and achievement of organizational goals with their work. Our mission says that we are a feminist, non-profit organization that advocates for the improvement of the social position of women and the achievement of sexual and gender equality, as well as for the full implementation of all laws and international instruments for the protection of human rights.

CESI bases its activities on working for the common good, following the values ​​of feminism, non-violence, equality, tolerance, respect for diversity, solidarity, and equal opportunities. The areas of activity of the organization are: women's human rights, education, gender-based violence, employment, health, and political participation of women, and the methods used include education and information, research and analysis, provision of psychosocial support, advocacy, and media campaigns, and networking, support, and cross-sectoral cooperation.

The program "Social justice and equal opportunities" seeks to influence the improvement of the social and economic position of vulnerable groups to create a fairer society. The program's activities aim to improve women's position in the world of work and combat violence against women. An SOS telephone and counseling center for women victims of violence in Krapina-Zagorje County were launched, as well as a free legal counseling center and the Internet portal Radnica.org, which denounces discriminatory practices. Support groups for unemployed women are also continuously held to empower long-term unemployed women in the job search/self-employment process. Also, a virtual gender-aware company was created, Recruitment toolbox", which facilitates the job search process for unemployed women.

The program "Social activism and political processes" aims to improve the active participation of citizens, especially women and young people, in decision-making processes and the responsible creation and implementation of public policies that respect gender equality. The activities of the program include the preparation of analyzes and recommendations for improving the protection of women's rights and the political participation of women and young people, education to improve skills and empower target groups - especially women engaged in local communities, advocating for the improvement of women's participation in decision-making processes, consistent implementation of a gender-aware policy, the implementation of quotas for women and the implementation of campaigns. The program also includes education on gender equality and the implementation of gender-aware policies, in cooperation with institutions and other women's/feminist organizations, for members of county commissions but also education for women active in politics and civil society organizations with the aim of empowering them for active participation in political processes. An internet portal has also been launched, Libela.org, as a "tool" for promoting gender equality in the public.

The program"Sex, gender and sexual rights" aims to promote gender equality among young people and encourage men's involvement in achieving gender equality. Program activities include continuous work on preventing and suppressing gender-based violence and raising public awareness of the need to remove gender stereotypes and other causes of gender-based violence, as well as improving the protection and promotion of sexual and reproductive rights and health. Educators' education is continuously conducted, including education for peer educators, and over the years, a network of professors in formal education institutions who work with students has been established. Through various activities, efforts are being made to include the gender perspective in youth violence prevention programs. 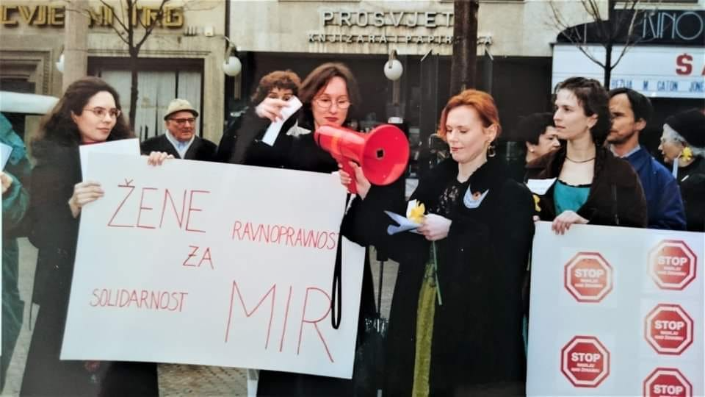 What was your motivation for working in the non-profit sector?

How has the COVID-19 crisis affected the work of CESI? What activities were you most focused on in the past two years? Has the pandemic affected the way of financing, has the form of funding and obtaining donations changed, and in what way?

Anamarija: Although the year 2020 brought new challenges in work to everyone, including our organization, due to the pandemic COVID-19 and the earthquake in Zagreb, we continued to work on all planned activities. Due to the pandemic, we have developed educational programs online, which is good because now our education can be attended by participants from all parts of the country. As far as funding is concerned, we were lucky to secure funds for institutional support and work just before the pandemic, which enabled us to work more calmly and carry out activities according to plan. What is problematic is that for two years, new tenders for civil society organizations from EU funds, which are carried out by national bodies to implement EU programs, have been awarded highly slowly or hardly at all.

Anamarija: CESI is financed from EU funds, the state budget and the budget of local self-government units, and international funds from the provision of education services on topics from the area of ​​work of CESI. This year, CESI's most prominent donors are the European Union, the National Foundation for the Development of Civil Society, the Sigrid Rausing Trust, the Fund for Active Citizenship in Croatia, the Ministry of Justice, the Ministry of Labour, the Pension System, Family, and Social Policy and Krapina - Zagorje County. We also have supporters - citizens support our work with donations.

From your experience, is it more difficult for feminist organizations to get support from donors, primarily citizens and companies, and what are the reasons for that?

Anamarija: Yes, it is more difficult since there are fewer and fewer programs dedicated to feminist organizations and activities that contribute to women's rights. As for private donations, CESI occasionally receives donations from those citizens who care about the feminist struggle and who recognize CESI as an organization that works to improve the position of women in society. Companies knew how to support us through open tenders and sponsorships, as well as in the implementation of campaigns. 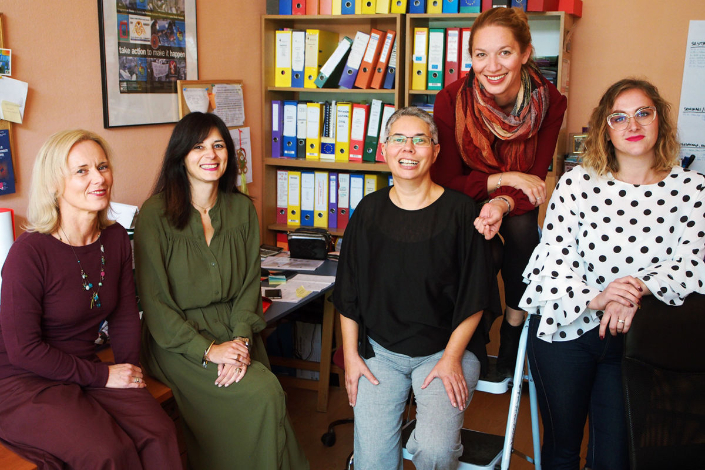 What activities are you most focused on right now? What are the most important plans and goals you plan to realize in the future?

Anamarija: CESI continuously works to improve women's rights and monitor legislative changes, so we are currently focused on changing and adopting the Labor Law and the Law on Termination of Pregnancy. We continuously provide free legal assistance and advice for victims of workplace discrimination and women victims of gender-based violence. Education and campaigns are an essential part of our work. We continue to work on raising awareness and educating citizens, especially children, and young people, on issues of violence in youth relationships, as well as on all other topics that we have been dealing with in our work for many years.

Do you involve the community in your work, in what ways, and what does it bring you?

Anamarija: We regularly involve citizens in analysis, research, and educational activities. This brings us a better understanding of the problems we are working on and the recognition of CESI as an organization from which people can get concrete legal help and support.

Do you cooperate with other non-profit organizations, associations, and foundations, and in what way?

Anamarija: We cooperate with domestic and foreign organizations, universities, and foundations, as well as occasional cooperation with the private sector through the projects and campaigns we carry out. We are also involved in the work of networks of domestic and international initiatives for the protection of women's rights.

What are the biggest challenges you face in your work? 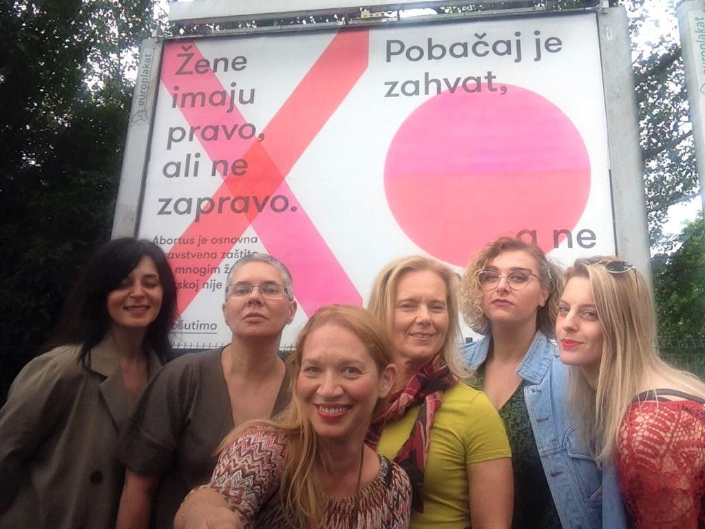 What are the biggest successes the Center has achieved so far, and what do you still want to achieve?

Anamarija: We are the first association in the territory of the Republic of Croatia and among the first in the region which systematically dealt with sensitizing young people to issues of gender and gender and preventing violence in adolescent relationships. Using our own experiences, theoretical knowledge, and the results of our research, we designed educational programs and published manuals for working with young people used in Croatia, Bosnia and Herzegovina, Serbia, Macedonia, Montenegro, and Bulgaria.

We designed the "Women and Leadership" training program for female leaders, which trained six generations of participants, including women active in blind organizations. They encouraged the establishment of some women's groups, e.g., the first female Roma group in Croatia, "Better Future." We created educational and informative portals (SEZAM, Radnica.org, Libela.org), then an experimental gender/sexual education program for high school students. We conducted the first research in the Republic of Croatia on men and gender equality (IMAGES research). We have educated several generations of young women to work on issues of gender equality and active socio-political engagement. We also cooperate with the Physicians' Initiative to regulate the right to appeal to conscience in medicine (which we helped establish), which advocates for preserving the dignity, integrity, and autonomy of pregnant women and the regulation of refusal to provide legal termination of pregnancy by medical personnel.

Also, we continuously thematize current social problems through research and reports in which we problematize the issue of abortion, sexual and reproductive rights in the context of neoconservative attacks, and appeal to conscience in reproductive medicine.

We have received domestic and international recognition and awards. The Silence is not Gold project, which aimed to prevent gender-based violence and was realized in cooperation with the OMG association, received an international award from ERSTE Bank for social integration in Bucharest in 2009. It was chosen as one of the examples of good practice in the prevention of domestic violence in the European Union. In 2002, at the "Media and Health" festival, the SEZAM website was declared the best website that provides young people with accurate and transparent information about sexuality and gender relations. The prize was awarded by the School of Public Health "Andrija Štampar" and the Ministry of Health. The European Institute for Gender Equality (EIGE) declared street action as an example of good practice in promoting women's political participation. A pillar of shame and the project Silence is not gold is also highlighted as an example of good practice in work on preventing gender-based violence.

At the Communication Days 2022. our It's Not OK in the Office campaign received the Grand Prix Effie for the most effective campaign of the year, Effie gold for the best campaign in the category Engaged community, Effie silver in the category Positive changes, MIXX for the best digital campaign in the Cross-Media Integration Campaign and IdejaX silver in the category Social responsibility. The campaign was designed and implemented as part of the Worker - Gender Equality in the World of Work project in collaboration with the creative agency Señor, media partner Outdoor Akzent and web agency Human.

The plan is to continue working on the feminist struggle and achieving women's equality to say that we truly live in a democratic society.